It was all too short.

It did start later than intended, since I did not sleep well (despite sitting, exercise, and a feeling of accomplishment: what’s up with that?). I stretched, walked, and worked out. I did some cooking. I re-stained the front porch and polished the mailbox. I did further sorting and consolidating of boxes in the basement. I (re)read for classes. I finished another translation chunk and uploaded it. I prepped for my dawn departure, including going to bed early . . . and once again did not sleep well.

However, caffeine and the stimulation of being in the classroom got me through the morning. We’ll see whether I can stay on track in the afternoon. I do have some mindless tasks, like scanning a short text, and returning books, so I’ll be able to do those if my thinking ability shuts down. It’s too bad I’ve finished all the dumb online form-filling I’m required to do every semester, because those are perfect tasks for tired days.

Still awesome: sat again, read more of the scholarly book I’ve been working on (am nearly halfway through now), reviewed a large chunk of translation, stretched, did 35 minutes of cardio at the gym. Then Sir John and I tackled the basement together. We filled the garbage bin and the recycling bin, and when I took a carload of things to Goodwill, the nice young man who helped me unload had to bring out a second wheeled bin after we filled the first one. Now I am tired and would like to be done for the day. Sir John is doing the grocery shopping, so when he gets back, I’ll need to help put stuff away, and then cook.

I wish the whole break had been like today and yesterday. That was what I was planning. Had all the days been like this, I think we’d be ready to have the house photographed. As it is, we may still need another week, and that’s if I can get all my professorial work done on campus and spend my home days doing house stuff.

At least I paid the bills last night.

Finally, a day on which I both felt well and did not have any social or other commitments.

I even woke up extra early and couldn’t go back to sleep, so I started the day soon after six, always a bonus. I sat, the first time in ages; may it augur well for future mornings. I read a section of the scholarly book I’ve been working on, stretched, studied a little of a dead language, worked through a large hunk of translation and uploaded a chunk, and did a little tinkering with the copy-edits of the MMP. Alas, the document I received earlier in the week was not, in fact, proofs, but an earlier stage in the editing process, with a few requests for further citations and details. (Once I felt that I could not quit this project; now it will not quit me.) I visited a library to check one of these references. I got my hair cut, went to the bank, bought vitamins, and visited the gym. I have added the library reference and sent the document back to the editor . . . who is out of the country on a research trip. I am envious. But at least I’m back to the MMP being on someone else’s desk rather than mine.

Another day of being under the weather. Marginally worse mentally, but marginally better physically, so I managed to cook a stir-fry, go for a very short walk, and do a load of laundry.

Yesterday I gave up on anything productive about mid-day, took a nap, re-read the first Invisible Library book, started the second. Today I finished the second and read all of the third. Maybe I should have done the re-reading before I read number four earlier this week.

I wonder what the odds are on tomorrow being a more energetic day.

This is not going to be an awesome day. I woke up to a flare-up of a chronic ailment, so I’m not feeling too good. Definitely not energetic. It could be worse: I’ll likely recover in a day or two, rather than being sick for a week or more (as with a cold or the flu), and since I’m on break, I don’t have to drive to campus. I can spend the day on quiet activities.

Proofs for the MMP just arrived in my inbox, so there’s a nice quiet activity. I will also try to think of some ways I can make tomorrow a better day, that is, get some low-energy stuff cleared out of the way that will mean my Future Self doesn’t have to deal with it. I’ve put away some laundry and cleaned my winter boots. Stuff like that. On a good day, I’d skip through those in ten minutes in the evening. On a day like this, it’s still better to take care of such low-level tasks than to feel like I’m getting nothing at all done.

Note to Future Selves: do not ever again arrange to go out on the night that the spring shift to DST happens. I think a lot of my recent trouble sleeping, and resulting flare, had to do with being out/up not just late but way too late because of that time change. I’ve been sort of jet-lagged ever since.

Since my last two spring break posts have ended with a hope for the next day, here’s another: I hope I can get through a chunk of quiet work that will make me feel that I did something worthwhile with today, and that tomorrow I’ll feel more energetic.

Despite my brave plans, there may have been some thrashing today. Do this? Do that? But the one! But the other! Avoidance activity! Anxiety spiral! More avoidance!

Eventually I pulled myself together and worked through 500 lines of translation, went to the gym, corresponded with a couple of students, paid for something online, read some more stories by P. S. Beagle, and tossed in a load of laundry. This is progress.

I hope to be truly awesome tomorrow.

The concert was lovely. Even better: every piece was new to me. Afterwards, we went to a bookstore and I bought Peter Beagle’s new collection, Overneath. When we got home, we watched two episodes of “Enterprise.” Over the course of the day, I read the first half of the fourth Invisible Library book.

I slept badly and felt very achy this morning, but I had an engagement with a friend visiting from out of town. We visited a greenhouse and then went to lunch. When I got home, I finished yesterday’s novel and read the first two stories in Overneath. I also did some of the cooking I didn’t do yesterday. We watched another “Enterprise” episode.

I hope to sleep better tonight. Tomorrow I need to do both Professorial Work and Life Stuff. Here’s a picture for the TLQ group: 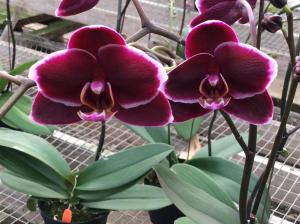 I drank fancy tea (a birthday present to Sir John from his mom, but I’m always the one who benefits from fancy tea, because he’s happy with a plain grocery-store tea bag) and did some reading in a very interesting scholarly book I’ve been hoping to get to for awhile now, writing fairly copiously in the margins so I’ll remember what I was thinking when I go back to it.

I did yoga and went to the gym.

I cooked fish, rice, vegetables, and mixed up cookie dough for later baking.

We drove a considerable distance for games night with friends, where we played a game to which Queen Joan introduced me, some time ago. It was a hit.

We drove home, and given the time change last night, I was up not just too late but way too late.

Today, so far, I have drunk fancy tea (quite a lot of it, to make up for the late night). I need to feed cats and exercise. We have tickets to an early music concert this afternoon (yes, we really do these things, it’s not just that I want the possibility of them). I will probably do more cooking.

Apparently I didn’t blog spring break last year. I’m not sure I remember it! I think I sorted out moldy boxes in the basement and packed away a lot of things upstairs. Plus ça change. The main things I need to do this year are Life Stuff: taxes and tidying, getting ready to list the house for sale. I’m trying not to thrash (a very descriptive CS term I picked up from Sir John). The only grading I have is a small set of in-class paragraphs. I could plan classes for the rest of the term, or I could keep winging it. I can keep research going with an hour or two a day. There’s nothing like having a lot of Life Stuff I really don’t want to do to make me want to Write All The Things, but I must resist. Some posts on writing are brewing in the back of my mind, including the promised one on what I learned from the MMP, so maybe I’ll show up here a little more often.

If you thought I was done with the MMP, you’d almost be right. I finished it. And then I did revisions, and put together the huge honking bibliography, and wrote an abstract. I was asked for more revisions, and I have just finished those and sent the thing off again. I hope not to see anything more about it until I get page proofs.

After a brief look at the last round of revisions, I thought they looked very manageable, and spent most of February not-doing them. That is, I was constantly aware that I should be working on them, and always found something else to do, partly because there really are plenty of things to do, and partly because I am so tired of hacking at that Octopus. A few days ago I untangled one of the most gnarly paragraphs, a Frankenstein’s monster of a paragraph that had pieces from two or three different iterations smashed together (and I’m not sure how it survived my last re-write, but these things happen). This morning I spent four hours not-working on the MMP: some productive procrastination, and some pure online sulking/avoidance. In the end, the actual work took the two hours I thought it should. I just . . . I don’t know. I think I was afraid of finding some enormous glaring mistake or omission if I looked at my essay again.

Anyway, done. And now I can do taxes, or grade, or some other useful thing. Ugh. I wonder if I procrastinated this morning so that I could do One Main Thing with my day, rather than cramming in many many useful pieces of work. The one-item list is so clear, so focused, so satisfying. I like getting big things done: sending off a submission, grading a whole set of papers. Many tasks have to be chipped away at, over time, and some of them feel like death by a thousand paper cuts. Even though I have plenty of evidence from my own work and life that chipping away over time produces results, it never feels as satisfying to say “I have done today’s stint” as it is to say “I am DONE.”

Some things really do have to be done all at once. Painting the basement stairs, for example, which I did a couple of days ago. Who’s going to paint one step a day?

I had a bunch of stuff on my February list that I realize is just not likely to happen until summer. It’s important, desirable, useful life stuff that I’m never going to get to while teaching, writing, translating, doing (or not-doing) tax prep, and getting my house ready to sell. Something has to give, and it is going to be those things.