She’d been able to find out about Ferdinand [the bull]’s political history from the internet. It was all there, accessible in seconds. Some of the fun has gone out of scholarship, it’s become too easy. She’s had to work hard to find an excuse to come to the British Library for the day, where she will be happy and at peace for a few hours in the silent company of scholars. But she has found herself a pretext. Maybe in the boxes of uncatalogued and unpublished letters of Hubert Studdert Meade, and in the papers of his old college, and in the manuscript drafts of his translations, she will find something new, something unremarked—about his wife Alice, the forgotten novelist with her uncut pages. . . . The library welcomes her. Her items are waiting for her. She installs herself at her desk, plugs in her lightweight mini-laptop, and begins to browse through the contents of the slim old-fashioned dark-red string-tied cardboard folder and the larger and smarter pale green canvas box.

She is too tired to embark on reading . . . but she leafs through the illustrations . . . . Amongst them is an arresting and accomplished pencil drawing of an unfamiliar and handsome young man, in an open-necked shirt, wearing an unassuming air of nonchalant gallantry. She glances at the caption, and finds that his name is Valentine Studdert Meade, an unusual name which in itself has no resonance but which nevertheless strikes her with a jolt of recognition. There can’t be all that many Studdert Meades, so he must be connected with her Deceased Wife’s Sister novelist. . . . Here must be a clue to Alice Studdert Meade, in this fairly unlikely place, discovered more or less randomly. This, she says to herself, sadly but with some satisfaction, is Scholarship, in all its triviality. She turns to the index, to discover more about Valentine . . . . Here, so unexpectedly, are clues.

The libraries mean as much to Josephine as explorations of England mean to her restless friend Fran. They confirm status, confer identity. When Josephine Drummond goes into the libraries that she uses most frequently, she is received with some degree of recognition. Sometimes her books are handed over without her having to request them by name. This doesn’t happen in the British Library in London, though even there she occasionally gets a friendly nod, but in Cambridge she is a familiar. Unlike some old women, she is easily recognisable, even memorable. Tall and pronounced of features, she will never dwindle into a little old lady, with all the conveniences and inconveniences which that status brings. Josephine may think she looks low-key, but she cannot help but look noticeable. She doesn’t look eccentric (or this is her friend Fran’s considered view) but she doesn’t look negligible. Her career hasn’t been distinguished, but has been a career, of a sort, and it’s not quite over yet.

[Josephine and Owen, both retired, meet each Thursday evening for a drink and conversation]

Owen had also been in the English Literature industry, though on a higher and better paid plane than she, and they like to talk about what they are reading, or about the books they had taught in the past. Josephine also likes to talk about her self-appointed research project, and Owen tolerates her discourse about her very small but (to her) intriguing discoveries. There is an element of forgivable because too-transparent condescension in his attention: he has published several volumes; she, so far over her whole career, only a couple of papers. He once pointed out to her, kindly and not unjustly, that many women have later-flowering careers and pursuits, so it’s all right for her to indulge herself comfortably with Victorian and Edwardian literature now, in her old age. He views her research as a hobby, not unlike tapestry.

My Spanish experiences are more Andalucian than Catalunyan, so, here, a rose from the Alhambra for the victims in Barcelona. 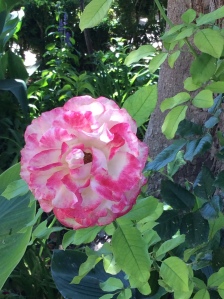 It turns out I love writing. It is such a pleasure, so much so that it seems bizarre to me that I haven’t ever tried it before. . . . it has always seemed like a distant dream or an idea for retirement. Being a writer is just a fantasy, impossibly difficult and inaccessible, something you daydream about. How do people do that? . . . . But of course, the Internet has changed everything, cracking open a closed shop: online writing is exploding. The blogs I read are almost exclusively by people who have no professional writing experience and they are fresh and unguarded and funny. . . . I feel caught up in that excitement and I write all the time, in notebooks and in my head, late at night and on my lunch break. I am full of words.

Sadly, this book is not (yet?) available in the US. I got it this summer in the UK. Highly recommend! You can order it via Amazon.co.uk.

July seemed like a very long month, perhaps because I was so busy. But the last three days of it also seemed very long, perhaps because I wasn’t trying to do very much, which I think is the secret of extending time. I kept thinking, “Is it still July? It’s still July. There’s some summer left. Wow.” I was surprised both that the trees and flowers were so late-summer looking, rather than early-summer as when I left (i.e., the trip was All A Dream and I was only “gone” one night), and that the season wasn’t even later (I was in Faerie and time stood still, or flowed more slowly, there than here). But here we are, on schedule.

The garden is shaggy but recognizable. Both creeping bellflower and bishop’s weed are making some attempts to return, but these attempts are as yet feeble and so I am pleased that I have made such progress against them. The mulch I spread lavishly before leaving is hosting lots of shoots grown up from bird seed, not to mention now being spread lavishly over the patio, because the beds need some sort of edging to hold the mulch in place. It has clearly been at least a couple of weeks since anyone mowed the lawn, and the shrubbery is growing enthusiastically over the walks it borders. On the whole, though, the garden has held up fairly well.

The house . . . Sir John has nearly emptied the TV room, and presided over some repairs, and moved around Stuff that needed to be moved so that those things could be worked on. Progress has definitely been made. And yet there is still a lot to do. There are more repairs to organize, more boxes to pack, and all the packed boxes still need to leave for rented storage space. I had hoped a lot of that might happen in my absence.

This experience, combined with a party we went to this weekend, have me thinking a lot about order, chaos, and stuff. Things. Objects. I feel like we have a lot of stuff. I am none too good at getting rid of stuff once it’s in the house. On the other hand, I do fairly well at not bringing it home in the first place. The friends who hosted the party have lived in the same four-bedroom house for probably 30 years, during which they raised one child and did a lot of traveling. They are musical and enjoy folk dancing; they read widely; they enjoy cooking and gardening. Every room is crammed with books, CDs, and souvenirs. The music room (probably originally intended as a small dining room), which faces south, has a windowsill overflowing with plants, pictures on the walls, multiple smaller instruments besides the piano, books, sheet music, and more. The family room has three large bookcases (not shelves, multi-shelf bookcases) full of cookbooks, as well as many and varied souvenirs of travels. The living room holds the music library as well as a multi-shelf case of small dolls in various national dance costumes and other dance souvenirs. And so on, with every room. Jet-lagged and needing to be quiet for a bit, I wandered around trying to find a place away from people for a few minutes, and the amount of stuff all over made me feel like there was nowhere to be quiet even when there weren’t people in the room. It’s not really into hoarding territory, by my standards (and my dad really is a hoarder, so I do know what that looks like). The house is livable and safe. But it does testify to a life lived rather than curated.

We also have friends both of whom are immigrants, and whose house shows that they left a lot behind when they came here. Everything is chosen. The furniture is colorful, the walls are white, a few choice objects are on display. It’s a restful house. To be sure, I don’t know what the private rooms are like. I have never seen them. Maybe they’re the house’s Id.

We’re somewhere in the middle. Books are our particular vice. Sir John is untidy and leaves piles of paper around much as a snail trails slime. Cat paraphernalia (beds, toys, scratching posts) also appear in every room. As do the cats, though we’ve cut down significantly there: when we had five, it really did seem like there was another cat everywhere you looked. Anyway, I’m trying to live with the current state of chaos: boxes in the living room, a stack of chairs (which we have agreed to de-accession) in the dining room, Sir John’s piles, my not-quite-unpacked luggage in my study, along with a single box of to-be-packed things that I need to pack. Behind the boxes, I’m beginning to see a pleasingly cleaned-up version of our house: what we might look like if we lived a curated life, rather than one in which Sir John can’t keep up with his mail and both of us are always accumulating more books. I prefer the boxes to the crammed shelves of our friends’ house. I hope there will come a time when we can cut back more on the stuff, yet keep what is important to us.

I guess that’s what this rambling post comes down to: trying to work out what is important. I know, people (cats) and experiences are important, and the rest is just stuff. But some stuff matters more than others, and I don’t like regretting the loss of objects I was too hasty about letting go. Once I’ve lived without some of it for awhile, we’ll see whether I say “Why was I keeping that?” or “Hello, there you are!” when we unpack the stored boxes.

In the meantime, August: balancing the work (finish summer projects, prepare for fall), the house stuff (as above), the life (take a week off and have some proper vacation time). I hope this, too, will be a long month.